The Best & Worst Drivers By State - The EmpireCovers Blog 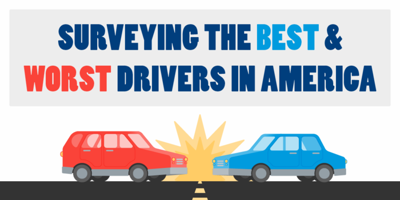 Driving is a part of everyday life for many Americans. As of 2018, there were over 225 million licensed drivers in the United States, meaning over two-thirds of the country are legally allowed to get behind the wheel and drive. Of course, just being licensed to drive doesn’t actually make someone a good driver.


Anyone who drives regularly has experienced bad drivers while on the road, with the worst offenders often becoming long-term reminders of what not to do while operating a vehicle. Recognizing that driving is a skill and some people are better at it than others, the team here at EmpireCovers wanted to explore how driving ability and driving records correlate to the kinds of cars people own and the states where they learned to drive.

To do this, we conducted a survey of over 2,600 licensed drivers from around the country, anonymously asking them to tell us what kind of car they drive, where they are from, how many points have been taken off their licenses, their accident and ticket history, and more. Once we evaluated the results, we found some very interesting trends and insights, which we turned into a series of graphics and maps. Read on to see all that data! 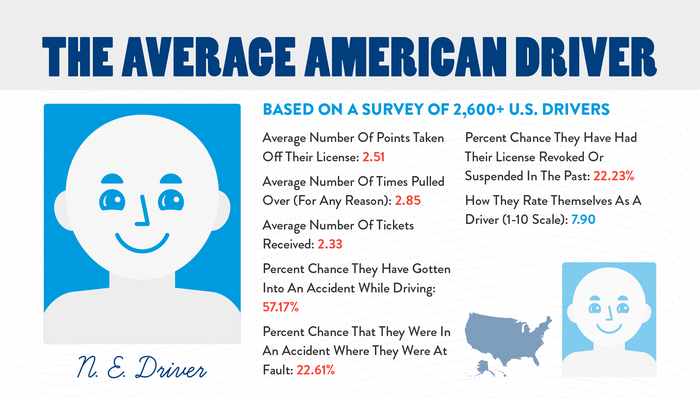 As a baseline to help contextualize the rest of the data, we looked at the total survey responses to find what the average driving record looks like. We found the average driver has been pulled over just under three times and received 2.33 tickets from those encounters, resulting in an average of 2.51 points taken off of their license. We also found that over 57% of drivers have gotten into an accident before, while 22% of drivers have been at fault for an accident in the past. A similar 22% have had their license suspended or revoked before. Finally, the average driver gives themselves a score of 7.90 out of 10 in terms of how they perceive their driving ability.

Having found what the average driver overall looks like, we wanted to find data on the average driver of different car brands. In the table above we highlighted the “best” brand in each column green and highlighted the “worst” in red. One thing that caught our eye was the fact that Volvo drivers were the “worst” in three different categories, indicating to us that Volvo drivers are some of the overall worst on the road. This is even more interesting considering U.S. News and World Report ranked Volvo second on their list of safest car brands of 2020, meaning the safety record of Volvos has to fight against user error in addition to everyday driving dangers.

While Volvo drivers were consistently ranked near the bottom of almost every category and recognized that in their self-assessments, we found a few instances where driving records and self-perception didn’t match up quite as consistently. We found that BMW drivers are near the bottom in multiple important categories, including having the MOST average number of points taken off their license, yet they still rate themselves as the second-best drivers among all car brands. We found similar disconnects between drivers in Nevada and Nebraska, where they finished with the worst results in major categories but still ranked themselves in the top-five overall. Conversely, Subaru drivers have largely excellent driving records, yet appear to doubt their skills behind the wheel, ranking themselves second-worst.

Finally, we turned state-by-state data in a series of interactive heat maps. You can use the drop-down menus to select a specific metric and then hover over a state to see their results for that metric, while the map overall shows how the states compare to one another. Feel free to explore and see how your home state stacks up to the rest of the country!

No matter where you live or what kind of car you drive, safety on the road is no accident. Taking steps to be a better driver can help keep yourself and others safe while behind the wheel. And if you want to keep your car safe even when you aren’t driving it, be sure to check out the selection of automotive covers for sale at EmpireCovers!