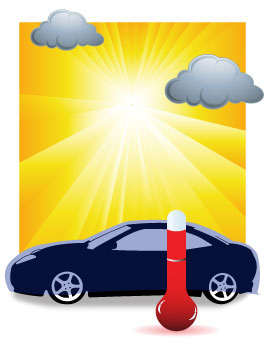 Wind and precipitation represent obvious threats to a car, but the sun’s invisible UV rays can be equally devastating. From faded upholstery and paint to cracked leather and vinyl, excessive sunlight and heat cause considerable damage over time. That’s why it’s important to select a vehicle cover that provides an insulating layer of protection, which has an added benefit of keeping the car’s interior cool and comfortable.

While this would seem especially relevant in areas that experience extreme summer temperatures, the fact is that even relatively mild temperatures can produce temperatures above 100 degrees inside a vehicle. This is due to a cumulative buildup of heat known as the Greenhouse Effect: radiation from the sun enters the vehicle, is absorbed into non-reflective surfaces, radiates from those surfaces, and cannot readily escape the interior back into the atmosphere.

This phenomenon explains annoyances like searing-hot seatbelt buckles or sunglasses that were left on the dashboard. But it also accounts for the news stories we hear every summer in which children and pets suffer heat stroke or worse after being left in the car for as little as 10 minutes. It’s no wonder - on a 90-degree day, after just 10 minutes in direct sun, a car’s interior reaches approximately 109 degrees. After 20 minutes, it reaches 119 degrees, and after 90 minutes, it reaches a staggering 138 degrees - hotter than the hottest surface temperature ever recorded on Earth.

To ensure that we offer the best products available, the EmpireCovers Research & Development Team conducts rigorous testing of our products before entering into commercial production. We, therefore, devised an Interior Temperature Test that allows us to systematically quantify the heat protection offered by different car covers. 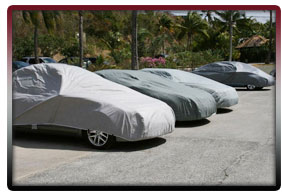 Our method consisted of parking four identical vehicles in an empty parking lot adjacent to each other and facing the same direction, such that they were as close as possible without casting shadows on the other vehicles. We then outfitted each vehicle with custom-built temperature and humidity sensor boxes placed directly under the front headrest. This position was chosen because it was the middle of the cabin, and was high enough to avoid direct exposure to sunlight, which could corrupt the data. Each temperature box transmitted its data every 10 seconds to a purpose-built wireless receiver and flash drive.

To record ambient conditions, we built a box containing sensors to measure temperature, humidity, and light. The box was placed in the shade, and the light sensor was duct-taped to a weight plate and placed in the sun. This was particularly useful for measuring how much sun the vehicles received, as well as for comparing data from multiple days.

Once outfitted with all recording equipment, the cars were covered and allowed to sit in direct sunlight for 12 hours, from before sunrise to after sunset. We continuously monitored and recorded the interior temperature of all vehicles, and during this time, the car covers were never removed and the cars were never opened.

This process was repeated throughout several days. Combining the data on ambient conditions with the data from the interiors of the cars tested, our team was able to ascertain a normalized temperature reduction factor for all the cars used in the testing.

Perhaps unsurprisingly, interior temperatures were lower for cars with any kind of cover. However, the amount by which each cover reduced the car’s interior temperature was positively correlated to the thickness and color of the material: the thicker and lighter the cover, the better its performance.

The worst performer of any reflective device or cover was the windshield-mounted reflector, which only lowered the interior temperature by a factor of 6.11 degrees Fahrenheit. Reasons for this include the reflector’s thinness, the inability of the reflector to cover all windows, and the fact that the windshield reflector is on the inside of the car, which allows the sun to penetrate the interior of the car.

Of the covers tested, Titan 5-Layer Series and Titan 4-Layer Series generally performed the best, but even our most budget-friendly options lowered the car’s temperature considerably versus no cover at all.

In summary, windshield reflectors offer negligible benefits in cooling a car’s interior or protecting it from damaging UV rays. Such reflectors are useless when compared to even the most basic car covers available. But car owners who are concerned about protecting their investment should invest in premium, high-quality EmpireCovers car covers, which are scientifically proven to significantly reduce the interior temperature of your vehicle.
‍
Learn more about how our covers protect against other harmful elements.